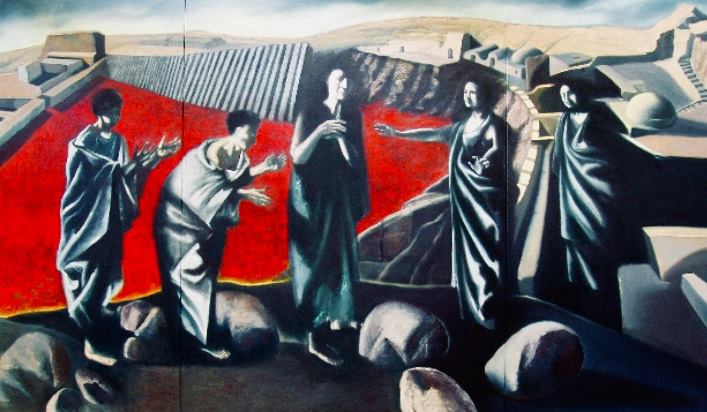 (Daughters of Zelophehad by Janet Shaffer, 3 panels Oil on Canvas 2006)

Shabbat Shalom! In our Torah this Shabbat we meet the five Daughters of Zelophehad who challenge the legal status quo to help honor their father’s name and legacy. God wasn’t angry at these 5 women. Rather, God agrees that their perspective is more just and fair and changes the law.

Let’s honor Mahlah, Noa, Hoglah, Milhah, and Tirtza by thinking of people throughout our history who have questioned the way things are with the hope of bringing more justice into our world.

1. Rabbi Yohanan ben Zakkai helped create a Jewish legal system that was not dependent on a central location to worship God through sacrifice after the Romans destroyed the 2nd Temple in 70 CE.
2. Rabbi Abraham Geiger who helped found the Reform Movement in the 19th century pushed policy and practice of inclusiveness and acceptance like families sitting together at worship services.
3. Supreme Court Justice Ruth Bader Ginsburg attributes Judaism’s ethical code for her empathy for minorities which is reflected in her legal rulings.
4. Our Reform Movement’s Teenagers from NFTY who lead our entire movement’s involvement in the March for our Lives and are calling for national reform on gun laws to take action to prevent the next mass shooting massacre from happening.
5. ???

**While all the people on my list are Jewish and worked for change within the context of a legal system, you can complete the list any way you see fit. Feel free to choose individuals or groups, Jews or non Jews, people working within the realm of political advocacy, people asking tough questions, or people who challenge the status quo by ‘dancing to the beat of their own drum.’

« Make for Yourself a Rav… » Our Journey Together